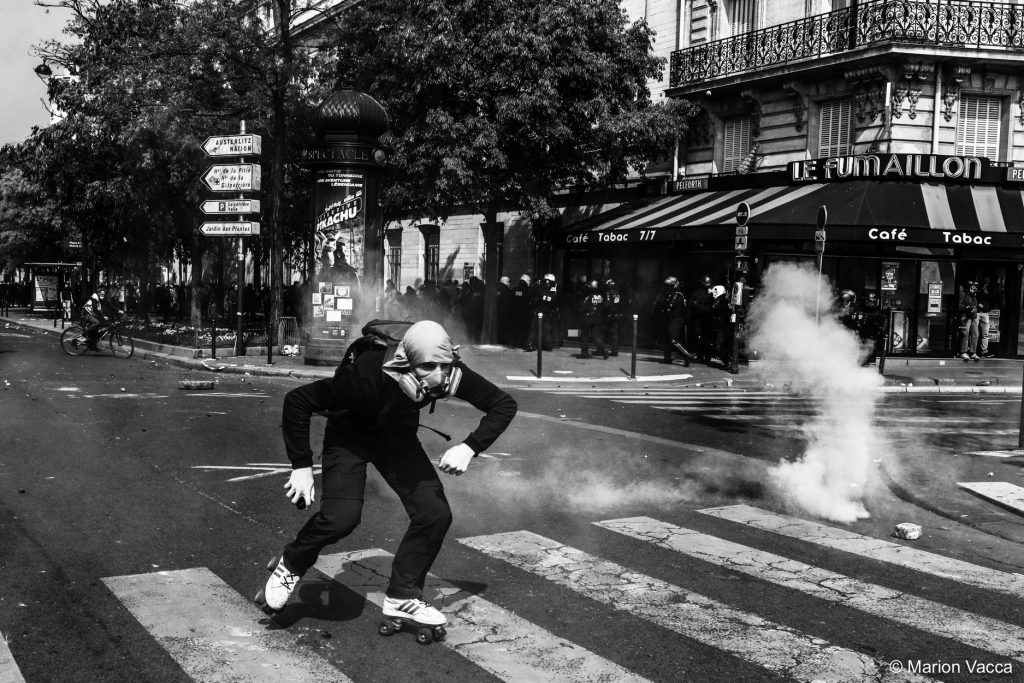 Since the end of November, as the Gilet Jaune’s movement develops, cops and banks are being regulary attacked. In such a context, the 1st of May could have been a radical break in this world made of borders and wars. It could have been the ungoing of the 16th of Marth’s riots and, to put it in perspective, an attack against the life-breaker industry called authority.

Nationalists and  Regionalists flags are all over the place, all over our grounds, and at the same time the courts are filling up the prisons as the french state annonced that it’ll be able to inprison 10,000  more people in the next 10 years, not to mention the Administrative Detention Center and psychiatric wards, and as the capitalistic speech tells us to smile as we die more and more in the inside. Work is just another way of saying « Kill me ».

Faced with the possibilities of a conflictuality going one step up on the 1st of May, the state decided to round up no more than 7400 co(r)ps(es) in Paris resulting in 20 000 pre-emptive controls. As a result, the protest was nothing more than a cop-contained-demonstration trying to be offensive.

Many demonstrators and companerxs from various nationalities are currently being held in the clutches of Justice and prison. Developing reflexes of collective defense as well as strategies of ruptures with the spectacle-like fonctionning of the courts appears necessary as the trials of the 21st and 23rd of May, as well as those of the 3rd, 4th, 6th and 14th of June, approach. But it seems even more necessary to carry on attacking directly those who produce and manage misery, here as everywhere.

Assuming that a defense in a court can only be offensive, that thoughts aren’t severable from acts and vice versa, and that ends exist as much as means that we experiment, we can easily figure that every institution going up in smoke is a breach to a world without firefighters, states, chiefs or cages.

Beyond barbed wires and borders, against prisons (with or without walls), solidarity !